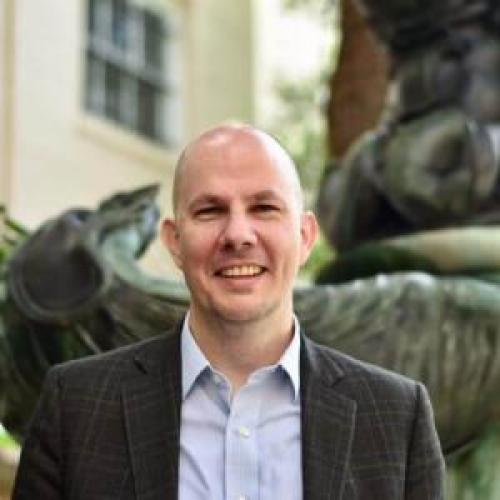 Norman Sandridge began his academic career at the University of Alabama in Huntsville with an undergraduate major in Physics and a minor in Mathematics. There he did research on sychronous sonoluminescence and space plasma physics in the Earth's ionosphere. He was chosen best physics student by the physics department in his junior and senior years. He was also the president of the Society for Ancient Languages in his senior year and was awarded best leader of an undergraduate academic organization. Dr. Sandridge earned an M.A. in Latin at Florida State University and was awarded the Rankin Prize there. Dr. Sandridge then earned an M.A. in Ancient Greek and a Ph.D. in Classics at the University of North Carolina in Chapel Hill with a dissertation on the Argonautica of Apollonius of Rhodes under the direction of Dr. William Race. In 2001 Dr. Sandridge was a summer-session student at the American School of Classical Studies in Athens and has been an ongoing fellow at Harvard's Center for Hellenic Studies since 2012. In AY 2014-2015 he was a Humanities Writ Large Fellow at Duke University.In his 20-year teaching career Dr. Sandridge has taught physics labs on mechanics, electricity and magnetism, and quantum physics; Latin language courses at all undergraduate levels; ancient Greek language courses at all undergraduate levels; English composition; mythology; Greek literature; Greek tragedy; Greek civilization; ancient comedy and satire; vocabulary building through Greek and Latin roots; and leadership in the ancient world. Dr. Sandridge has taught at Howard University in the Classics Department since 2005. Dr. Sandridge is a co-founder of Kallion Leadership, an organization devoted to the study of leadership and the training of leaders through the humanities. Dr. Sandridge's research has focused on ancient leadership, including leadership and the emotions, ideal leadership, the process of becoming a leader, and leadership and the contemporary construct of psychopathy. Much of his work relies on the use of digital humanities. In 2011 he co-created with Dr. David Carlisle a collaborative online commentary to Xenophon's Education of Cyrus. In 2012 he published a book entitled Loving Humanity, Learning, and Being Honored: The Foundations of Leadership in Xenophon's Education of Cyrus, which may be read online. Currently, Dr. Sandridge is co-editing the Wiley-Blackwell Companion to Greco-Roman Leadership with Dr. Sarah Ferrario and co-editing with Dr. Mallory Monaco Caterine a SAGE series of business case studies on "Becoming a Leader in the Ancient World." Dr. Sandridge has lectured recently at the University of Findlay, University College Dublin, Princeton University, Villanova University, the University of Vermont, and the University of Crete (Rethymnon). He was recently interviewed by Forbes Magazine blogger, Brook Manville, and also the Times Higher Education. More of Dr. Sandridge's work may be found on his Academia profile and the Kallion website.email: normansandridge@gmail.com

BS
University of Alabama in Huntsville
1997

Leadership in the Ancient World: Writing Across the Curriculum (WAC)

This course has students reflect on and write about the process of "becoming a leader" as it appears in several ancient Greek works (Homer's Odyssey, Sophocles' Philoctetes, Xenophon's Education of Cyrus, Aristophanes' Lysistrata, Plutarch's Virtues of Women) and in later literature and film (Jorge Luis Borges' "The Dead Man", the writings of Ida B. Wells, Larry Kramer's The Normal Heart, Hannah Gadsby's "Nanette", Disney's Moana, and Ryan Coogler's The Black Panther).http://scalar.usc.edu/works/writing-across-the-curriculum--leadership-in...

This course focuses on the two great epics of the ancient Greek world, the Iliad and the Odyssey (attributed to a poet called Homer). https://medium.com/@normansandridge/greek-literature-in-translation-fall...