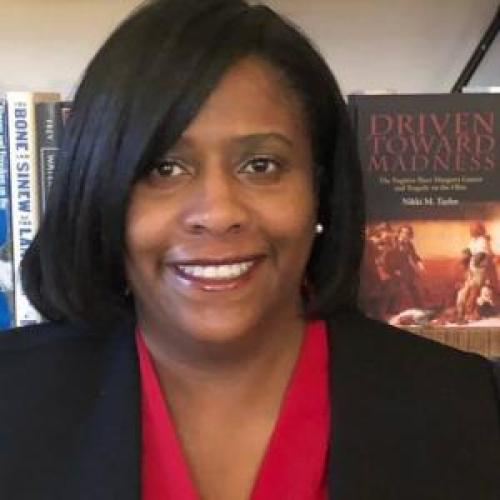 Dr. Nikki M. Taylor, Professor of History and Chair of the Department, specializes in 19th century African American History. Her sub-specialties are in Urban, African American Women, and Intellectual History. Educated at the University of Pennsylvania (BA) and Duke University (MA, PhD, Certificate in Women's Studies). Dr. Taylor has won several fellowships including Fulbright, Social Science Research Council, and Woodrow Wilson. She is also the Principal Investigator of two instutional grants, including the $5 million Mellon Just Futures grant (2021) and the Mellon Mays Undergraduate Fellowship Program Grant ($480k in 2017) Nikki M. Taylor is currently completing her 4th monograph, "'Brooding Over Bloody Revenge:' Enslaved Women, 'Wild Justice' and Lethal Resistance to Slavery." The manuscript examines enslaved women who used lethal violence to resist slavery from the colonial to antebllum eras, challenging all previous interpretations about the nature of their resistance.  Her first book, Frontiers of Freedom: Cincinnati’s Black Community 1802-68 (2005) uses the backdrop of one of the nineteenth-century's most racist American cities to chart the emergence of a very conscientious black community--a community of people who employed various tactics such as black nationalism, emigration, legislative agitation, political alliances, self-education, and even armed self-defense to carve out a space for themselves as free people living in the shadow of slavery.Professor Taylor’s second book, America's First Black Socialist: The Radical Life of Peter H. Clark (2013), is a political and intellectual biography of one of the foremost African American activists, intellectuals, orators, and politicians in the nineteenth-century--a man whose name once was spoken in the same breath as Frederick Douglass, Dr. McCune Smith, and John Mercer Langston. This book charts Clark’s journey from recommending that slaveholders be sent to "hospitable/ graves," to advocating for a separate black nation, to forging alliances with German socialists and labor radicals, to adopting the conservative mantle of the Democratic Party.Driven Toward Madness: The Fugitive Slave Margaret Garner and Tragedy on the Ohio (2016) is Dr. Taylor's third monograph. This book is a biography of Margaret Garner, an enslaved wife and mother who, along with her entire family, escaped from slavery in northern Kentucky in 1856. When their owners caught up with the Garner family, Margaret tried to kill all four of her children--and succeeded in killing one--rather than see them return to slavery. Using black feminist and interdisciplinary methodologies, this book tetells this harrowing story from the perspective of Margaret Garner--a woman who could not read or write and left little of her own voice in the historical record. Ultimately, Driven Toward Madness examines why this fated act was the last best option for her as an enslaved mother. Inspired by Garner's story, Dr. Taylor's current research is about enslaved women who used armed violence to resist slavery.

Dr. Taylor is the PI of a $5 million Grant from the Mellon Foundation to establish a Howard University Social Justice Consortium.