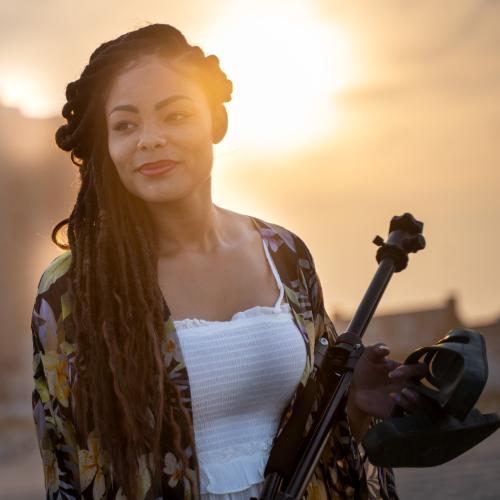 Dr. Nicole Dezrea Jenkins is an Assistant Professor in the Department of Sociology and Criminology at Howard University. She received her Doctoral degree from the University of Nevada Las Vegas in the Department of Sociology in 2020. She obtained an M.A. in Sociology in 2017 and B.A. in Sociology in 2015 from the University of Nevada Las Vegas. In 2013, she received an A.A. in Criminal Justice after serving six years of active duty in the United States Air Force as Military Police. She is a proud advocate for social justice and committed to teaching with such emphasis on topics such as Sociology of Poverty and Problems of the Black Community. As a qualitative researcher and urban ethnographer, she incorporates intersectional and critical feminist frameworks into her own research, centering the experiences of women of color. ​ Her recent research project incorporates two years of ethnographic data collection in a Las Vegas African hair braiding salon. She finds that Black women's identity-making process is complex and perceptions of nationhood and Black womeness often impede the process. She is the recipient of the Princeton University Press Supportive Diverse Voices Book Proposal Development Grant and is currently working on her first book project from this research project tentatively entitled CROWNed: Black Women’s Entanglement with U.S. institutions.

Socioology of Poverty examines the underlying causes and the social, psychological, and political consequences of poverty; the socioeconomic characteristics and family life of the poor; and the community services and programs designed to alleviate poverty.The goal of this course is to explore poverty in the context of the United States from a sociological perspective from a practical standpoint. The course is designed to be both informative and useful in practice. Throughout the quarter we will discuss and learn about how poverty is defined, who sets this definition and explore some of the causes of poverty. Although there are many explanations, this course will use a sociological viewpoint to better understand how structures influence people and shape outcomes for individuals. Throughout the course we will read text that describe the everyday lives of those living in poverty and reflect upon how this impacts society as a whole. We will discuss the various policy and programs attempting to alleviate poverty and discuss their potential positive and negative impact. Furthermore, we will use this information to propose potential actions in the future to lessen and/or address the crisis of poverty.

Sociology is the study of social life and the social causes and consequences of human behavior. It investigates the structure of groups, organizations and societies, their information development and interaction. Since all human behavior is social, the subject matter of sociology ranges from the intimate family to the hostile mob; from crime to religion; from divisions of race, gender and social class to a shared belief of a common culture. The Sociology undergraduate program offers courses such as research methods, statistics, theory, computer based social science research and social organization and demographic analysis. This goal of this program is to equip students for employment in a wide range of occupational fields in the public and private sector, such as social research, the health professions, business, social service, and data processing. Sociology is a popular undergraduate major for students planning to further studies in such professions as law, business, education, social work and public administration. Professional recruiters are interested in well-rounded students with good analytical and communication skills.

Problems of the Black Community

Most scholars of intersectionality argue that categories of inequality transform one another. In their empirical analysis, they routinely situate specific categories as master statuses, for example, “black woman” or “immigrant woman.” A growing group of scholars has begun to question the stability of these categories, arguing that context complicates even seemingly stable categories. Drawing on two years of ethnographic fieldwork in a hair-braiding salon located in the Las Vegas valley, where black West African immigrant women professionally braid black American women’s hair, I provide an empirical case that underlines how identity categories usually constructed as stable by sociocultural theorists are often internally contested within the communities that occupy them. My observations demonstrate that both West African and black American women contest competing explanations of what it means to be black women through boundaries. They rely on pejorative stories about the other group at a time when both antiblack racism and antiimmigrant sentiments are on the rise in the contemporary United States. In engaging in the politics of defining black womanhood within white patriarchy, the women reproduce gendered racial hierarchies.https://journals.sagepub.com/doi/abs/10.1177/0891241619829210Jenkins, Nicole Dezrea. “Contested Identities: African Diaspora and Identity Making in a Hair Braiding Salon.” Journal of contemporary ethnography 48.6 (2019): 806–835. Web.