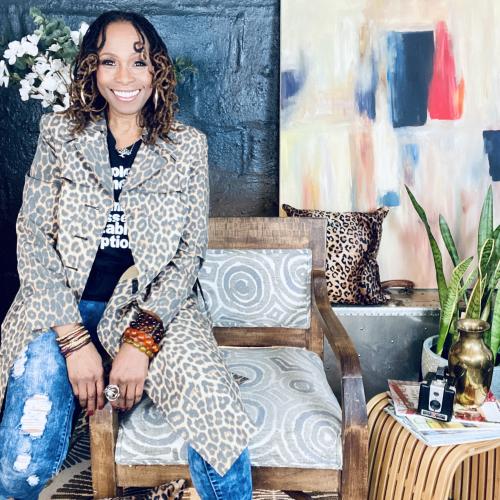 She has previously held academic positions at St. Mary's College as the 2019 Visiting Professor, where she taught in the Department of Theatre, Film and Media Studies. She's also taught at American University and Duke Ellington School of the Arts.

Recipient of the 2021 Provost's Distinguished Service Award and the 2018 Outstanding Associate Professor, Denise holds an MFA in Playwriting from Sarah Lawrence College where she was awarded the Lipkin Prize for Playwriting. She acquired her BFA in Acting from  Howard University where she was the president (95/96) of the historic Howard Players drama organization.

Her training in TV scriptwriting was completed at Script Anatomy in Los Angeles CA;  and comedy writing at Second City Chicago and Upright Citizens Brigade NYC

One of the highlights of Hart's career has been serving as a faculty-fellow in the innovative partnership program between Howard University and Amazon Studios, Howard Entertainment. The program has the goal of diversifying the entertainment industry.

In 2019, she was appointed Visiting Professor at St. Mary's College and in 2022 she was invited to participate in the Unexpected Stage Company's Artist Retreat for BIPOC Playwrights.

Hart's scholarly research focuses on African American Theatre. As a playwright and dramaturge her work explores the intersections of race, class and identity, and the impact they have on cultural memory and family. Her scholarship is driven by a commitment to document and preserve under researched narratives in the history of Black Theatre, particularly black playwrights.

In 2018 she was selected to contribute her scholarly research in the Routledge Companion to African American Theatre and Performance in the chapter, The Howard University Players: From Respectability Politics to Black Representation.

Coordinator of the Playwriting program at Howard University, Hart is the recipient of several international playwriting honors and awards: This Joy, (former finalist in the Eugene O’Neill National Playwrights competition and the Lark Fellowship,) Nothing to Lose (finalist 2018 Bay Area Playwrights, former finalist in Black and Latino Playwrights Conference) Sistah Girl, Masquerade Parade, Ring the Bell, My Soul is a Witness (winner of ECTC playwriting competition), The Last Day, In the Realm of Shadows, Chasing Forever, Peace Declared, and A Real Black Comedy.

My scholarly research is focused on African American Theatre. As a playwright and dramaturge I'm interested in exploring the intersections of race, class and identity, and the impact they have on cultural memory and family. My scholarship is driven by a commitment to document and preserve under researched narratives in the history of Black Theatre, particularly black playwrights.

PLAYWRITING 1 - A beginning playwriting course that aides the student with developing their creative process as playwrights. Students learn the fundamental craftsmanship of dramatic structure, plot, character development, motivation, creating stakes and writing realistic dialogue. Students write one scene per week that culminate in a one act play.PLAYWRITING 2 - Students further examine the process of developing characters, setting, developing a premise and writing dialogue through a variety of scene assignments within the 10 minute play structure work. Students are also introduced to character archetypes and writing in groups that mirror/reflect the energy and demand of the television writers room.

INTRODUCTION TO PRODUCTION DRAMATURGY – introduction to the fundamentals of production dramaturgy through the theoretical study of the dramaturgical processes and the practical application of dramaturgy for a live production. Students are introduced to the history of dramaturgy and the key elements of pre-production research on the playwright and the historical and social context of the play. Students execute a variety of projects that engage textual analysis, dramatic criticism, play analysis and historiography.

SCRIPT DEVELOPMENT/TV PRODUCTION - is an immersive interdisciplinary class reliant upon an industry executive integrated into the curriculum who will among other things, teach students industry standards and best practices of TV production as it relates to the script development process (i.e. original material vs. adapted material, creating a package, attaching talent, etc.), how the creative process works at studios and networks and demystifying the process of developing a TV show/series. During the first several weeks of the course students will learn the various roles of television producers as well as learn how writers typically interface within that ecosystem. Students will learn how to create a log line and pitch to producers. An experiential pitch fest will be led by faculty and industry executives. The students will pitch within the genres of horror, family adventure, musicals for TV, coming of age, etc. Executives will provide students with valuable feedback focused on increasing knowledge, confidence and developing a pitch process. The course will center around a final project consisting of a fully produced short (5-7 minute) film. During the first several weeks of the course the students will have a series of short form writing assignments focused on character development, minor/major conflict and writing inside of a specific genre: horror, family adventure, musicals for TV, coming of age, etc. For the culminating semester final project, students will write a 5-7 minute film.

PLAY ANALYSIS - Introduction to Aristotelian elements and principles of drama. Critical analysis and dramaturgy of dramatic literature and theatrical genres with regard to plot, theme, and character, approached from the director’s and actor’s viewpoints.

My scholarly research is focused on African American Theatre. As a playwright and dramaturge I'm interested in exploring the intersections of race, class and identity, and the impact they have on cultural memory and family. My scholarship is driven by a commitment to document and preserve under researched narratives in the history of Black Theatre, particularly black playwrights.

Before the New Negro: Alain Locke's Influence on the Howard University Players

Currently I'm researching and developing two essay's in the underrepresented research areas of the life and contributions of luminary Howard University professors, Alain L. Locke, known as "the Father of the Harlem Renaissance" and T. Montgomery Gregory.

Culture as Strategy: Alain Locke's Influence on the Making of the Howard Players 1912-1924

From Dream Fulfilled to Dream Deferred: Locke and Gregory's Struggle to Establish the Howard University Department of Dramatic Art in 1921

This research will be of significant value to scholars doing research on: Black Theatre, The Howard Players, Historic context of theatre in Washington DC, History of Howard University, Theatre History, Theatre in Higher Education, Alain Locke, T. Montgomery Gregory and playwrights of the Harlem Renaissance, among others.

During a semester long residency at St. Mary's College in the Department of Theater, Film and Media Studies I served their student population in the role of guest artist, instructor and director.Since there aren't any African American faculty members in the Department of Theater, Film and Media Studies, during academic year 2017/18, several students made an appeal to the administration to bring an African American guest artist to the department to specifically direct a play written by a black playwright. Being in residence at a predominately white institution presented a wonderful opportunity to present material with the African American experience at the center of the subject matter and discourse, for an audience less accustomed to encountering such material. I choose to direct the play "Stick Fly" written by award winning playwright, Lydia Diamond. The play is filled with tensions centered on race, class and the power and impact of family secretes. Additionally, I taught a course entitled, Dramaturgy and Analysis: the plays of August Wilson.

Howard, like many HBCUs, held fast to the belief that respectability politics, or the presentation of Eurocentric acceptable standards of appearance and behavior, would protect Black people from prejudices and systemic injustices. This chapter examines how the “respectability” framework shaped the plays produced by the Howard Players from 1919 to the mid-1960s; it also reviews how this paradigm of respectability shifted as a result of the Black Power movement of the 1960s into the 1970s.

Recipient of the Outstanding Tenured Associate Professor Award in the College of Arts and Sciences, Division of Fine Arts at Howard University. This award emphasizes overall achievements in research, teaching and service.

Hart is a commissioned playwright with Plowshares Theatre CompanyPlowshares Theatre Company is one of the oldest continuous nationally recognized African American theatre company's and is recognized as Michigan’s only professional African American theatre company. Plowshares has been the alternative voice in metro Detroit’s performing arts community. A theatre that offers a true off-Broadway experience, with the kind of entertaining, and diverse productions that has made it a favorite among discerning patrons.

Featured playwright/speaker for the 2020 Penn State African American Read In.

2019 Chapter in Routledge Companion to African American Theatre and Performance

Howard, like many HBCUs, held fast to the belief that respectability politics, or the presentation of Eurocentric acceptable standards of appearance and behavior, would protect Black people from prejudices and systemic injustices. This chapter examines how the “respectability” framework shaped the plays produced by the Howard Players from 1919 to the mid-1960s; it also reviews how this paradigm of respectability shifted as a result of the Black Power movement of the 1960s into the 1970s.

Mosaic Theatre: Post show panelist for the production Twisted Melodies: HBCUs: A Home for Black Artists. focused on Howard University, and other HBCUs, as a nurturing ground for black artists.

Beyond Respectability Politics - the Evolution of Black Theatre at Howard University

Presenter at 2017 32nd Annual Black Theatre Network conference: Liberation Theatre When Black Theatre Works, Memphis TNIn 2015 The Dramatist Guild released a report stating that only 3.4% of the produced plays in the US were by women of color and 6% were by men of color, which sheds light on the necessity of HBCU’s to lead the charge of black people being exposed to stories on stage that reflect the black experience. This presentation will shed light on the importance of the Howard Players and the trajectory that led to their definitive role in the advancement of the black experience on stage. Attention will also be given to the organization’s early years, when there was an adherence to “respectability politics" and a resulting smattering of plays written by black playwrights, and the shift in the late ’60’s, which resulted in the Department producing more plays by black playwrights.

2019 Dramaturgy Production Symposium facilitator and presenter for Flyin' West by Pearl Cleage to support production in the Department of Theatre Arts.