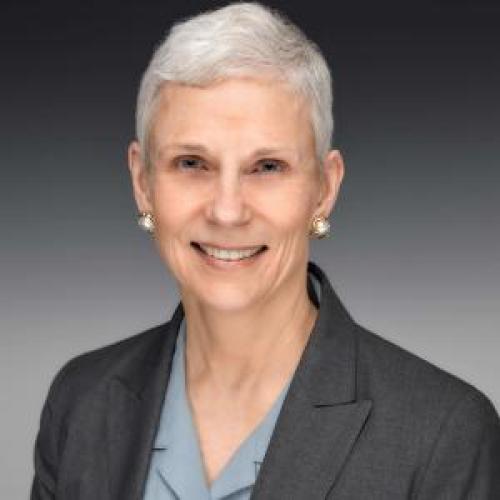 Alice Ogden Bellis was born and raised in North Carolina. She attended Mount Holyoke College and graduated from Duke University with a BA in Religion magna cum laude, from Howard University with an MDiv cum laude, from Catholic University with an MA and PhD in Semitic languages, and most recently from Howard University with an MBA. An ordained minister and Professor of Hebrew Bible at Howard University School of Divinity for over 25 years, before joining the faculty at HUSD, she was first an assistant, then associate, and twice acting head of staff at Providence Presbyterian Church in Fairfax, VA.  Dr. Bellis has written numerous books and articles, including Proverbs (Wisdom Commentary Series; Collegeville, MN: Liturgical Press), which won the 2019 Catholic Publishers Association Book of the Year Award. Her most recent book is Africa and the Bible: Corrective Lenses (Eugene, OR: Wifk and Stock), an edited volume of the writings of Gene Rice, emeritus professor of Old Testament at Howard University School of Divinity. She has also just published an edited volume, How Plausible Is a Kushite Role in Sennacherib’s Retreat? A Conversation with Henry Aubin’s The Rescue of Jerusalem (JHS 19:7 (Piscataway Township, NJ: Gorgias Press, 2019.  See full publication list below. Before coming to Howard, she served as a pastor for fifteen years and still is actively involved in a church community; she preaches on a regular basis in the DMV area. Nana (as she is known to her grandchildren) has two married adult daughters, Margaret Douglass English and Elizabeth Ogden Bellis Wolfe, both attorneys, three grand-daughters Azalea and Vivian Bellis Wolfe and Clara English, and one grandson, Henry Bellis Wolfe. She is married to Dr. Jeff Nicoll, a physicist, who is also an alumnus of HUSD (MA - RS, 2018). They live in Washington, DC. Alice Bellis enjoys swimming on Washington, DC's Water Wizards Swim Team, knitting, gardening, and working on her house.

The following publications are in these research areas:

Alice Ogden Bellis, ed., How Plausible Is a Kushite Role in Sennacherib’s Retreat? A Conversation with Henry Aubin’s The Rescue of Jerusalem, JHS 19:7 (2019) and Perspectives on Hebrew Scriptures and Its Contexts 32 (Pistacaway Township, NJ: Gorgias, 2020.

The second semester of a course designed to introduce students to the basics of Classical/Biblical Hebrew. In this semester students use Logos Bible Software to read the stories of Ruth and Jonah and the beginning chapters of Genesis, consolidating their knowledge of vocabulary and grammar and learning a little about Hebrew syntax. They pronounce the material, becoming more fluent in pronunciation, as well as becoming better at comprehending the written text.

In this online course students watch two films each week and read chapters from a textbook on Film and Religion, as well as reviews, both academic and popular, on the films of the week. They take quizzes on their readings, participate in Discussion Board chats, and discuss the films and material through Zoom video-conference software at lunchtime once a week. There is a research paper dealing with some aspect of film and religion of the student's choice.

Africa and the Bible

In this online course, students are introduced to the positive role of Kushites in the Hebrew Bible. They read the works of former Howard University School of Divinity faculty such as Cain Hope Felder, who was a pioneer in the field of the African perspective in NT studies, and Dr. Gene Rice, who similarly pioneered an understanding of Black presence and influence in Hebrew Bible/Old Testament. Students also read the writings of several alumni of the school such as Rodney Sadler who now teaches at Union Seminary in Charlotte as well as former faculty members who now serve elsewhere such as Renita Weems and Nyasha Junior. They focus on Black women such as Hagar and the Queen of Sheba, considering her from several angles. They spend several weeks on the events of 701 BCE when Sennacherib almost destroyed Jerusalem but failed, probably due to the approach of a Kushite army led by Tirhakah, who later became Pharoah in the 25th Egyptian (Kushite) dynasty, an event of great importance, but not well known. The students discuss the material on a discussion board and in weekly virtual sessions and write a research paper on a topic of their choosing.

African presence in and influence on the Bible; women in the Bible; Proverbs; prophets, esp. Jeremiah and Minor Prophets; Hebrew poetry

The Catholic Publishers Association website explains:From the Scripture category, Proverbs by Alice Ogden Bellis (published by Liturgical Press) took the top honor. Judges commented that this book adds “significant diversity to the market of biblical commentaries” and is “a huge undertaking, taking the next step in writing that updates all of the earlier work on biblical research from a feminist point of view.” They noted that the volume was greatly enhanced by extra features on topics like “Translation Matters” and “Excursus."

The translation of Song 1:5a as “I am black and beautiful” in NRSV racializes a passage that is not about race or ethnicity. It is the translator’s version of cheap grace. While the battle against racist language is ongoing, this verse is not the right battleground. Positive images of Africans fill the Hebrew Bible /Tanakh/Old Testament, but misleading illustrations, translations, maps, and commentaries obscure them. Rather than misconstruing the plain meaning of Song 1:5a, we should highlight the vital role of Africans in the Bible and expose the cover-up in much past scholarship that minimizes it. The Shulamite is ethnically no different from her Jerusalemite sisters. This verse is more about class distinctions than ethnic or racial ones. A contextual rendering for Song 1:5a is better: “I am burnt but beautiful.” It conveys the speaker’s meaning and is even euphonic. It does not give the false impression that this verse is about race or ethnicity. It maintains the speaker’s defiance in the face of her brothers’ attempts to control her behavior. She is no wimp. She is a strong young woman, demanding that the daughters of Jerusalem do as she bids them and implicitly that her brothers and the broader community allow her to lead her own life. Her brothers have forced her temporarily to do work considered lower class due to the sun’s harmful effects. Nevertheless, nobody will dictate the terms of beauty, class, or honor and shame to her. She is burnt, but she is beautiful.

This article surveys recent research on the book of Proverbs (from 2011-2020).