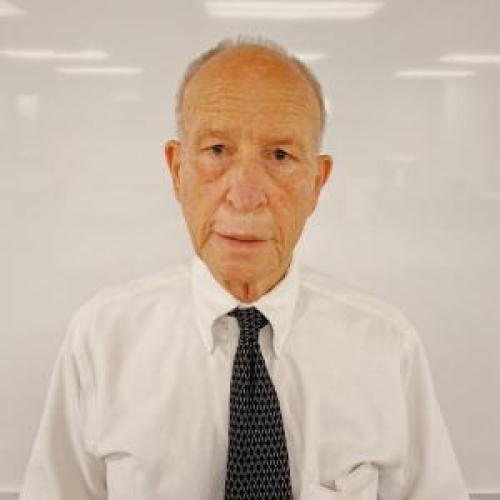 B. A. with High Honors
Universisty of Maryland, College Park
1965

Covers a wide range of topics pertaining to wealth management.   Provides students with the knowledge essential for developing and implementing successful wealth management strategies.  The goals of these strategies are the creation, enhancement, preservation and appropritate transfer of wealth.   The knowledge gained by the students in this course can be applied both in their personal lives and in the realization of their career/professional opportunities.

Covers a wide range of topics pertaining to personal financial planning including credit management, effective communicaion of the finacial counselor with their clients, tax planning, estate planning, insurance planning, retirement planning and investment strategies.   The knowledge obtained in this course can be applied toward the development and implementation of successful personal financial planning strategies.  Students can also apply the knowledge obtained in this course toward the realization of their career/professional opportunities.

Seminar in Finance: Technical Analysis of the Financial Markets

Provides students with the concepts and knowledge than can be applied to the technical analysis and forerecasting of financial markets.  The course covers important topics such as the applications of oscillators, pattern recognition, cycle analysis, supply/demand analysis, sentiment indicators, and trend analysis to forecasting the financial markets.   Risk managment and money management strategies are also an integral part of this course.     The course is available to all majors.   It is also an elective for finance majors.   The only pre-requisite for the course is a serious interest in financial market forecasting.

One finding of this empirical investigation was that a company's per share price to sales ratio (PSR) was the valuation ratio with the highest explanatory power for subsequent stock returns and the most consistently significant relationshiop with subsequent stock returns.    There was a statistically significnat inverse relationshiop between this ratio and subsequent stock returns.     The research also tested multivariate regressions  which decomposed the PSR into various other financial ratios.  The PSR component with the highest explanatory power for subseqeusnt stock returns was the net profit margin.  For this PSR component there was a statistically significant inverse relationship with future stock returns.  This finding is consistent with evidence provided by earlier researchers that the relatively favorable returns of low PSR stocks reflects the market overreaction to both the depressed current profitablilty of value stocks and the high current profitabiltiy of companies with relatively high valuation ratios.

This report was an empirical investigation of the relaltionships between common stock returns and the Presidential terms of both Republican and Democratic Presidential Adminintations.  The research found the highest average rate of return during the third year of a Presidential term which can be explained by the administration's implementation of measures to improve economic perfomance prior to the next election.  The lowest average rates of return for the stock market were observed during the 1st year of a Presidential term because of obviously diminished interest in the next Presidential election.     Another finding was that Democratic Presidential administrations were especially favorable to the rates of return of small company stocks.  That can be explained by the expansionary pro-growth monetary policies that are generally associated with their administrations.

This study was an empirical examination of the impact of financial sector reform in Ghana on promoting and increasing savings mobilization to the country's banking system and private sector.  The empirical results of this study showed that financial sector reform did not realize its intended goal of raising private sector financial saving through the banking system.  Statistical tests of econometric models showed that the inflationary pressures caused by the government's fiscal policy of deficit spending and the associated expansionary monetary policy caused higher inflation rates that reduced the real interest rates on deposits The lower real interest rates reduced the incentives to save through the banking system.     The policy conclusion of this research is that governments should adopt fiscal and monetary policies to lower the inflation rate to single digits in order to raise the  deposit real interest rate, which would  provide an adequate incentive for savings mobilization through the banking system and the private sector of the economy.

"The Development of Capital Markets and Growth in Sub-Saharan Africa: The Case of Ghana," African Economic Policy Discussion Paper, U. S. A. I. D., 2/1/2001, with Dr. Sam Ziorklui.

This research examined the constraints and impediments to the development of capital markets in Ghana, and also the effects of policy changes to enhance the development of capital markets there.  A primary policy objective of the developing countries should be to increase the allocation of capital to the private sector  in order to raise the growth rate of the economy.     In Ghana, the macroeconomic policies of fiscal deficits have had the negative effects of crowding out the allocation of credit to medium and small businesses and have resulted in capital being attracted away from the private sector.  Further, increased regulatory requirements for the banks have had the adverse effect of curtailing the allocation of bank lending to the private sector of the economy.     A favorable economic development has been the establishment of the Ghana Stock Exchange which has provided a means for corporations to raise long-term capital to finance future growth and has provided investors with an opportunity for diversification.     The policy implications of this research include reducing the fiscal deficits, less restrictive regulations of the banks, and enhancing/expanding the operations of the Ghana Stock Exchange.

"The Injustices of an American Urban Correctional Facility: A Prison Teacher's Report," with Magdelena Campbell, 2016.

Reviewed, revised and rewrote this enlightening booklet.   The report's conclusion was that mass incarcerations, some of which were associated with the "war on drugs," imposed excessive and unnecessarily high costs on the taxpayer with extremely minimal benefits to society.   In order for this situation to improve, it is essential that sufficient educational resources are allocated to enable inmates to receive the training required for them to be successful outside of the overcrowded prison system.  Despite the extremely low benefits to society of the current prison system, it has been profitable to some companies and individuals who therefore have a significant vested interest in the continuation of the current system.

"Relations Between Portfolio Returns and Market Multiples," Proceedings of the Academy of Financial Services 2004 Annual Meeting, with Drs. Jeong and Mukherji.

"How and Why are Stock Returns Related to Market Multiples," presented at the 2001 Southern Finance Association Annual Meeting, with Drs. Jeong and Mukherji.

This article was an empirical investigation of the potential role of 4 explanatory variables for the future returns of a company's common stock.  The 4 variables were the per share sales-to-price ratio (the SPR), the ratio between a company's book value and the market value of its equity, the  firm's debt to market value of equity ratio, and the market value of a company's equity (which is a measure of a firm's size).  One finding of this research is that there was a statistically significant relationship between the per share sales to price ratio (the SPR) and the subsequent returns of a company's common stock.     Another very significant finding of this research was that the SPR absorbed the roles of the 3 other explantory variables for subsequent stock returns and "...the SPR consistently has the greatest explanatory power for stock returns among the four variables that were examined...." (P. 58)     The findings of this empirical investigation support the conclusion that investors should consider selecting stocks for their portfolios with relatively high values for the SPR since these stocks may be undervalued relative to their long-term potential and  therefore can be expected to have favorable subsequent rates of return.