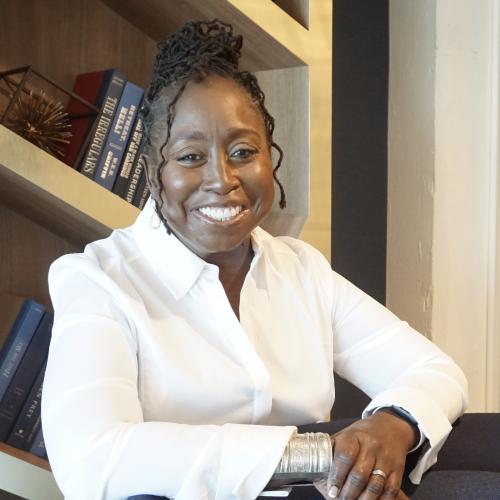 Renee K. Harrison is an Associate Professor of African American and U.S. Religious History at Howard University. She joined the School of Divinity faculty in the fall of 2010.

Before her appointment at Howard, Dr. Harrison was an Assistant Professor of African American Religious History, Practices, and Culture at Payne Theological Seminary in Wilberforce, Ohio. She also served as the Visiting Assistant Professor and Interim Director of Black Church Studies at Candler School of Theology after completing a post-doctoral fellowship in Religious Practices and Practical Theology at Emory.

Dr. Harrison's research interests include an interdisciplinary and interfaith approach to African American religious history and culture, early American religious history, black feminist/womanist thought, aesthetic theory and the arts, phenomenology, and rituals of healing and resistance. Harrison is the recipient of awards, grants, and fellowships. She earned her Bachelor of Arts in Journalism (major) and African American Studies (minor) from California State University Northridge in Northridge, California; Master of Divinity and Master of Arts in Religious Studies (with honors) from the Interdenominational Theological Center in Atlanta, Georgia; and Ph.D. in Religion with an interdisciplinary concentration in history, philosophy, African American Studies, and feminist/womanist thought from Emory University in Atlanta, Georgia.

She is the author of Enslaved Women and the Art of Resistance in Antebellum America (Palgrave Macmillan, 2009); Engaged Teaching in Theology and Religion, co-author with Dr. Jennie Knight, University of Virginia (Palgrave Macmillan, 2015); and, Black Hands, White House: Slave Labor and the Making of America (Fortress Press, Nov 2021). Black Hands, White House documents and appraises enslaved women and men's role in building the U.S. and its physical and fiscal infrastructure. The manuscript highlights the material commodities produced by enslaved communities during the Transatlantic Slave Trade. These commodities—cotton, tobacco, and sugar—enriched European and U.S. economies. The work of enslaved people in the U.S. contributed to the material and monetary wealth of the nation's founders, other early European immigrants, and their descendants. It bolstered the wealth of present-day companies founded during the American slave era. Given the enslaved community's contribution to the U.S., Black Hands questions the absence of memorials (e.g., stand-alone monuments) on the National Mall that honor enslaved Black-bodied people. Harrison calls for a particular kind of Enslaved Labor Memorial to redress the nation's historical disregard for Black people and America's role in their forced migration, violent subjugation, and free labor. Such a memorial, commissioned by the U.S. government, could serve as one means to publicly demonstrate the government's admission of the U.S.' historical role in slavery and human harm and acknowledge the karmic debt owed to these first-Black-bodied builders of America.

A native of Los Angeles, California, Dr. Harrison is a retired 11-year veteran of the LAPD and the former executive director of A Leap of Faith Productions, a non-profit community-based theatre group in Los Angeles. She is an artist, poet, and playwright who loves loves loves teaching! She also enjoys spending her spare time researching and writing, walking on the beach, playing and watching tennis (no doubt The G.O.A.T. Serena), viewing all things DuVernay and Rhimes, and traveling with her spouse Yolonda and pup Satchmo.