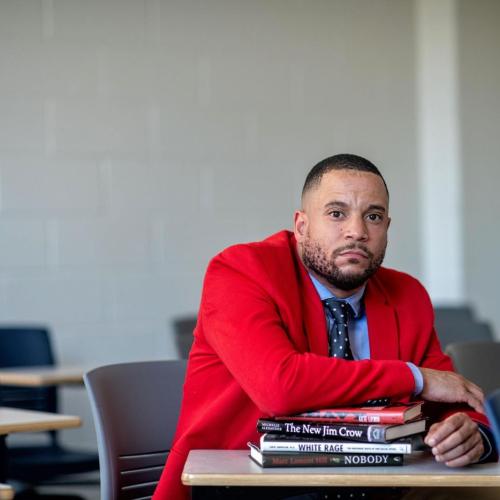 Dr. Ravi K. Perry, 40, served the Department of Political Science at Howard University as Chair from 2019-2022 .  He is a Professor of Political Science. Previously, Dr. Perry was Chair of the Department of Political Science at Virginia Commonwealth University and was a member of the faculty at Mississippi State University and Clark University (Worcester, MA).  Dr. Perry holds a B.A. from the University of Michigan and a M.A. and Ph.D. from Brown University, each in political science. An expert on Black politics, minority representation, urban politics, American public policy, and LGBT candidates of color, Dr. Perry is the editor of 21st Century Urban Race Politics: Representing Minorities as Universal Interests, a book that discusses the efforts of African American, Latino and Asian mayors to represent the interests of minorities in historically White cities in the United States. His second book, entitled Black Mayors, White Majorities: The Balancing Act of Racial Politics, focuses on the challenges Black mayors face in representing Black interests in majority White, medium‐sized cities in the state of  Ohio.  His third book, published with his mother, is The Little Rock Crisis: What Desegregation Politics Says About Us. In it, Perry and Perry frame the story of the Little Rock 1957 desegregation crisis through the lens of memory. Over time, those memories – individual and collective – have motivated Little Rockians for social and political action and engagement. Currently, Dr. Perry is finishing a book that introduces the lives and campaigns of Black, and openly lesbian and gay elected officials in the United States.

In his limited spare time in the District, Dr. Perry, a ward 7 resident, also enjoys playing tennis, volunteering, and is a member of Metropolitan AME Church. Dr. Perry is Vice Chair at DC Vote and a member of the Board of Directors at Us Helping Us People Into Living. Dr. Perry is also a member of Kappa Alpha Psi Fraternity, Inc. Washington DC Alumni Chapter.

Recently named one of 20 under 40 "Shapers of the Future" worldwide by Encyclopedia Britannica in social activism and politics, Dr. Perry is the recipient of numerous awards and honors, including being recognized as one of the Andrew Goodman Foundation’s 50 “Hero Citizens;” Out Magazine’s “Hidden 105” and The Advocate’s “193 Reasons to Have Pride,” and “40 under 40.