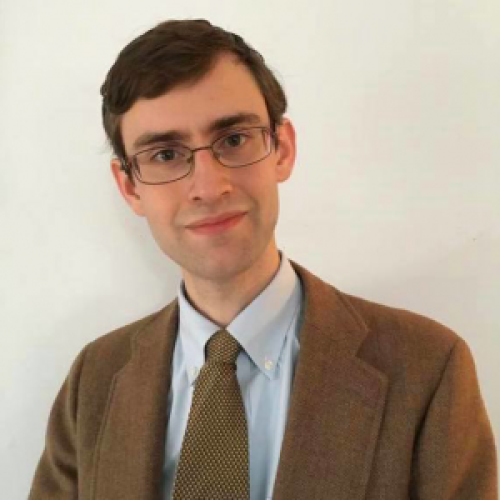 Dr. Matthew Franke joined the Department of Music in 2015. Prior to coming to Howard, he taught music history at Roanoke College in Salem, Virginia. He holds a Ph.D. in musicology from the University of North Carolina at Chapel Hill (2014).

At Howard, he teaches courses on the history of Western classical music, popular music, music appreciation, and music theory. The chief Division A courses he teaches are Introduction to Music (MUSC 100) and Global Popular Music (MUSC 110). Dr. Franke is also responsible for the music history sequence for majors and minors (MUSC 010, 011, and 012), as well as advanced courses for music history majors. In Spring 2022, he received an Outstanding Teaching Award from the College of Fine Arts.

His research focuses on French and Italian opera in the 1890s, with a particular focus on the operas of Massenet, Bizet, and Puccini. His dissertation (“The Impact of Jules Massenet’s Operas in Milan, 1893–1903”) was partially funded by a grant from the Council for European Studies. He has published articles in Nineteenth-Century Music Review, College Music Symposium, and Teaching & Learning Inquiry. He was also a contributor to the award-winning volume and companion website Carmen Abroad.

He is also the curator of the List of Open-Access Music Journals, which is the single largest online collection of freely-accessible scholarship on music. You can find the database on his personal site.

Dr. Franke is an active presenter and chair at conferences and colloquia. He has presented research papers at national meetings of the American Musicological Society, the Society for American Music, the International Congress on Medieval Studies, and the Biennial Conference on Nineteenth-Century Music, as well as at international conferences in Italy, the United Kingdom, and Switzerland. He has given invited lectures at Brown University, Catholic University, Shenandoah Conservatory, and the University of Bern (Switzerland), and chaired paper sessions at local and national meetings of the American Musicological Society.

Dr. Franke is a member of the American Musicological Society; he is currently serving as secretary of the Capital Chapter.

This is the first semester the Department's history sequence for music majors and minors. It's got loads of exciting connections to the ways we make music today, including some of the earliest surviving music theory and musical notation. The timeframe is roughly from "Antiquity" to 1680; in geographic terms, the music studied largely derives from cultures on the shores of the Mediterranean Sea. A unique feature of this course is its emphasis on basic Medieval modal theory, which is different from the type you study in jazz. Success in this course requires regular attendance and preparation.

This is the second semester in the Department's history sequence for majors and minors. This class focuses on the years 1680 to 1880, which saw the rise of "common practice" harmony and tonal practice, and the origins of many musical concepts we still employ today. Much of the music from this period still forms the core of the modern classical repertoire, including well-known musicians such as Bach, Mozart, Beethoven, Wagner, and Verdi. This is also an exciting period in terms of black music history, as we have notated music by composers such as Ignatius Sancho, the Chevalier De Saint-Georges, and Blind Tom. Success in this class requires regular attendance and participation.

This is the third semester in the Department's history sequence for majors and minors. This is a survey of musical developments in the twentieth century--which means that this class includes discussion of jazz, rock, blues, and related traditions. Success in this class requires regular participation and attendance.

This is a Division A music appreciation course which focuses on Western classical music. No prior musical experience is required to excel in this class, but expect to listen to a lot of interesting music in new ways.

Love Afrobeat, reggae, Kpop, or Indian film songs? Or are you wondering why American artists are constantly mining other cultures' music for new sounds and beats? This might be the Division A class for you. Success in this class requires preparation--that means listening to the music and having a grasp of the readings--before you come to class.

The climactic scene in Massenet's opera Werther – as in Goethe's novella – occurs when Werther reads a poem by Ossian. The air resembles a German lied, with a rippling harp accompaniment that may be a reference to other Ossianic settings. Steven Huebner has suggested that the lied reference is meant to create a sense of German local colour in the opera. However, little work has been done to explain why Massenet would have chosen to set an Ossianic text in the style of a German lied.

The current article addresses this question by considering the references to specific German lieder by Schumann and Schubert heard by early critics in the Ossian reading. The subsequent discussion explores the French reception of German lieder and Massenet's personal knowledge of Schubert and Schumann's music. These references to Schumann, Schubert and Ossian expose a complex set of intertextual relationships between Massenet's opera and other Ossianic music, the characters in Massenet's opera and their milieu, and Massenet's depiction of German music and culture.

Despite Huebner's well-chosen criticisms of Massenet's depiction of the German setting, I argue that the lied and its harp accompaniment are dramatically meaningful gestures that highlight Werther's Ossianic character arc throughout the opera, hinting at his sentimentality, weakness, and non-normative masculinity in relation to nineteenth-century gender stereotypes. This interpretation, following Massenet's own account of the opera's genesis, prioritizes the Ossian reading as the crux of the drama. The resulting analysis demonstrates the audible influence of Schumann and Schubert on Werther, and Massenet's musical approach to the Ossianic tropes of nature, decay and fate.