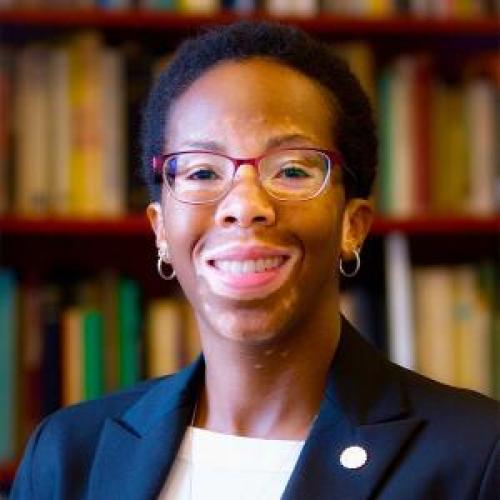 Dr. Kim Michelle Lewis is from New Orleans, Louisiana. She received her secondary education in the New Orleans Public school system and in 1994 graduated from McDonogh #35 Senior High School, the first high school for African-American students in the State of Louisiana. She studied at Dillard University, a Historical Black College and University in New Orleans, and received the David and Lucile Packard and the UNCF/Mellon Fellowships. She earned her Bachelor of Science degree in Physics in 1998. In that same year Dr. Lewis was accepted to the University of Michigan Applied Physics Ph.D. Program and received a David and Lucile Packard Fellowship and several Pre-doctoral Research Grants from the Social Science Research Council. Dr. Lewis’ thesis work in Condensed Matter Physics was the development of single electron devices for application as low-noise electrometers. Her graduate advisor was Professor Ç. Kurdak. Her work led to a U.S. Patent No. 6,777,911 in August 2004. Dr. Lewis completed her Master of Science in Electrical Engineering in August 2003 while working toward her Ph.D. in Applied Physics which she earned in August 2004 from the University of Michigan.

At the University of Michigan, Dr. Lewis became the 2001 president of the Movement of Underrepresented Sisters in Engineering and Science (MUSES), which is a formal dialogue group for women of color. In 2002 she co-authored a publication entitled, "A Place of Her Own? Strategies for Supporting Graduate Women of Color". In 2001 Dr. Lewis became the chairperson of the Gallium Arsenide Bay Committee for the University of Michigan Solid State Electronics Laboratory, currently the Lurie Nanofabrication Facility.

Dr. Lewis accepted a 2004 postdoctoral position at Louisiana State University in Baton Rouge in the Department of Electrical and Computer Engineering and the Center for Computation and Technology with Professor Theda Daniels-Race. In April 2005, she received a Ford Foundation Postdoctoral Fellowship to continue her research in molecular electronics.

In 2009 Dr. Lewis was awarded a Career Enhancement Fellowship by the Woodrow Wilson Foundation and a National Science Foundation (NSF) BRIGE Award. She received the NSF Career Award in 2012. Her research expertise is in quantum transport in nanoscale structures, such as thin films and molecular junctions using techniques that include inelastic electron tunneling spectroscopy and scanning probe microscopy. Other interests of Dr. Lewis include the study of the electrophysiology of biological systems, including adult stem cells for therapeutic and regenerative medicine applications.

Currently, Dr. Lewis is the Associate Dean for Research, Graduate Programs, and Natural Sciences and Professor of Physics in the College of Arts and Sciences at Howard University. Her interests are to provide college-wide leadership to strengthen its research and graduate programs, to support the promotion and tenure of faculty, and build collaborative interdisciplinary teams across the Division of Natural Sciences to attract federally funded grants. Throughout her career Dr. Lewis continues to participate in community outreach efforts.