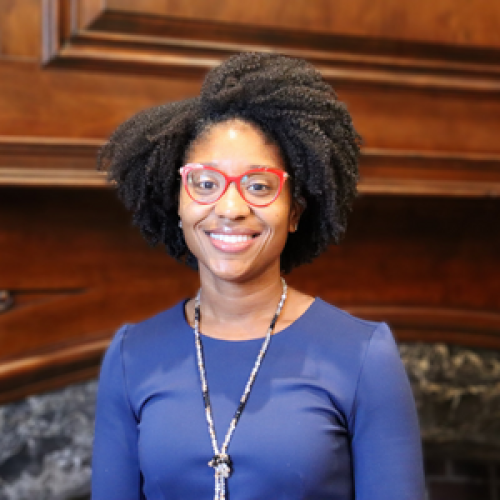 Keneshia Grant, PhD is an associate professor of political science at Howard University. She studies the political impact of Black migration in the United States and her research focus is the political impact of Black migration from 1915 to the present. Keneshia is author of The Great Migration and the Democratic Party: Black Voters and the Realignment of American Politics in the 20th Century (Temple University Press, 2020), which describes Black Americans’ movement into the Democratic Party in the 20th century as a function of their migration to northern cities. Keneshia’s current work questions how return migration, gentrification, and displacement affect civic engagement among Black populations in cities and inner-ring suburbs. Keneshia is a regular media contributor, frequently quoted in national print news outlets and appearing on MSNBC and the Canadian Broadcast Corporation. She is a proud graduate of Florida A&M University and earned her PhD in political science at the Maxwell School at Syracuse University.

Course Description:Comparison and analysis of government organization and operations, intergovernmental relations, political participation, policies, and fiscal management.Course Goals:Make students thoughtful and critical consumers of news and information about politics, especially at the state and local levels.Make students aware of their roles and responsibilities as participants in the American electorate.

Competitive university fellowship awarded by the Office of the Associate Provost for Research and Graduate Studies to Assistant Professors in the year before their tenure.

Competitive university fellowship awarded annually by the Office of the Associate Provost for Research and Graduate Studies to launch programs or finish a project involving their research.

Juneteenth brings together many celebrations, and reminders of the work still ahead

Ambition Has Always Been ‘Ladylike’