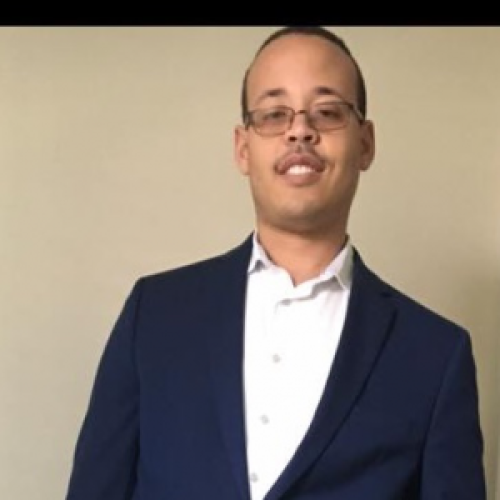 Dr. Joel B. Coley completed his Ph.D. in Physics in 2015 at the University of Maryland Baltimore County.  He joined Howard University in 2018, currently serving as an Assistant Professor in the Department of Physics & Astronomy.  His research interests focuses on binary star evolution at key phases in their lifetime, specifically when X-ray and/or gamma-ray emission dominates their spectra.  This topic spans from accretion in High-mass X-ray Binaries to Particle Acceleration in High-mass Gamma-ray Binaries and Transitional Millisecond Pulsars.  Dr. Coley is currently studying superorbital modulation in High-mass X-ray Binaries where the wind from OB supergiant stars is the dominate mode of accretion, multi-wavelength emission in gamma-ray binaries and X-ray reprocessing at optical wavelengths.

IGR J16493-4348 is an eclipsing supergiant high-mass X-ray binary (sgHMXB), where accretion onto the compact object occurs via the radially outflowing stellar wind of its early B-type companion. We present an analysis of the system’s X-ray variability and periodic modulation using pointed observations (2.5-25 keV) and Galactic bulge scans (2-10 keV) from the Rossi X-ray Timing Explorer (RXTE) Proportional Counter Array (PCA), along with Swift Burst Alert Telescope (BAT) 70-month snapshot (14-195 keV) and transient monitor (15-50 keV) observations. The orbital eclipse profiles from the PCA scan and BAT light curves are modeled using asymmetric and symmetric step and ramp functions. We obtain an improved orbital period measurement of 6.7828 ± 0.0004 days from an observed minus calculated (O-C) analysis of mid-eclipse times derived from the BAT transient monitor and PCA scan data. No evidence is found for the presence of a strong photoionization or accretion wake. We refine the superorbital period to 20.067 ± 0.009 days from the discrete Fourier transform (DFT) of the BAT transient monitor light curve. A pulse period of 1093.1036 ± 0.0004 s is measured from a pulsar timing analysis using pointed PCA observations spanning ˜1.4 binary orbits. We present pulse times of arrival (ToAs), circular and eccentric timing models, and calculations of the system’s Keplerian binary orbital parameters. We derive an X-ray mass function of {f}x(M)={13.2}-2.5+2.4 M ⊙ and find a spectral type of B0.5 Ia for the supergiant companion through constraints on the mass and radius of the donor. Measurements of the eclipse half-angle and additional parameters describing the system geometry are provided.ADS Link: http://adsabs.harvard.edu/abs/2019ApJ...873...86P

The Physics of Accretion Onto Highly Magnetized Neutron Stars

Studying physical processes occurring above the magnetic poles of strongly magnetized, accreting neutron stars provides us with a laboratory for studying high temperature plasmas exposed to extreme conditions. This white paper discusses the current theoretical and observational challenges, and the importance of addressing these challenges.ADS Link: https://ui.adsabs.harvard.edu/abs/2019BAAS...51c.386W

We report the identification from multi-wavelength observations of the Fermi Large Area Telescope (LAT) source 4FGL J1405.1-6119 (= 3FGL J1405.4-6119) as a high-mass gamma-ray binary. Observations with the LAT show that gamma-ray emission from the system is modulated at a period of 13.7135 +/- 0.0019 days, with the presence of two maxima per orbit with different spectral properties. X-ray observations using the Neil Gehrels Swift Observatory X-ray Telescope (XRT) show that X-ray emission is also modulated at this period, but with a single maximum that is closer to the secondary lower-energy gamma-ray maximum. A radio source, coincident with the X-ray source, is also found from Australia Telescope Compact Array (ATCA) observations, and the radio emission is modulated on the gamma-ray period with similar phasing to the X-ray emission. A large degree of interstellar obscuration severely hampers optical observations, but a near-infrared counterpart is found. Near-infrared spectroscopy indicates an O6 III spectral classification. This is the third gamma-ray binary to be discovered with the Fermi LAT from periodic modulation of the gamma-ray emission, the other two sources also have early O star, rather than Be star, counterparts. We consider at what distances we can detect such modulated gamma-ray emission with the LAT, and examine constraints on the gamma-ray binary population of the Milky Way.ADS Link: https://ui.adsabs.harvard.edu/abs/2019ApJ...884...93C/abstract

Hard X-ray observations with the Neil Gehrels Swift Observatory Burst Alert Telescope (BAT) reveal superorbital modulation in the wind-accreting supergiant high-mass X-ray binary (HMXB) 4U 1538-52 at a period of 14.9130 +/- 0.0026 days that is consistent with four times the 3.73 day orbital period. These periods agree with a previously suggested correlation between superorbital and orbital periods in similar HMXBs. During the ~14 years of observations the superorbital modulation changes amplitude, and since ~MJD 57,650 it was no longer detected in the power spectrum, although a peak near the second harmonic of this was present for some time. Measurements of the spin period of the neutron star in the system with the Fermi Gamma-ray Burst Monitor show a long-term spin-down trend which halted towards the end of the light curve, suggesting a connection between dP(spin)/dt and superorbital modulation, as proposed for 2S 0114+650. However, an earlier torque reversal from INTEGRAL observations was not associated with superorbital modulation changes. B and V band photometry from the Las Cumbres Observatory reveals orbital ellipsoidal photometric variability, but no superorbital optical modulation. However the photometry was obtained when the 14.9130 day period was no longer detected in the BAT power spectrum. We revisit possible superorbital modulation in BAT observations of IGR J16393-4643 but cannot conclusively determine whether this is present, although is not persistent. We consider superorbital modulation mechanisms, and suggest that the Corotating Interaction Region model, with small deviations from orbital synchronization, appears promising.ADS Link: https://ui.adsabs.harvard.edu/abs/2021ApJ...906...13C/abstract

The X-ray pulsar XTE J1858+034 observed with NuSTAR and Fermi/GBM: spectral and timing characterization plus a cyclotron line

Accreting X-ray pulsars (XRPs) undergo luminous X-ray outbursts during which the spectral andtiming behavior of the neutron star can be studied in detail. We analyze a NuSTAR observation ofthe XRP XTE J1858+034 during its outburst in 2019. The spectrum is fit with a phenomenological, a semi-empirical and a physical spectral model. A candidate cyclotron line is found at 48 keV, implying a magnetic field of 5.4×10^12 G at the site of emission. This is also supported by the physical best-fit model. We propose an orbital period of about 81 days based on the visual inspection of the X-ray outbursts recurrence time. Based on Fermi Gamma-ray Burst Monitor data, the standard diskaccretion-torque theory allowed us to infer a distance of 10.9±1.0 kpc. Pulse profiles are single-peaked and show a pulsed fraction that is strongly energy-dependent at least up to 40 keV.ADS Link: https://ui.adsabs.harvard.edu/abs/2021arXiv210107020M/abstract