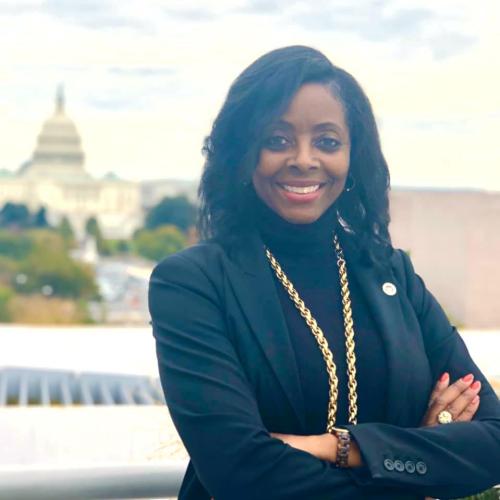 JENNIFER C. THOMAS is an Associate Professor in the Department of Media, Journalism and Film at her esteemed alma mater, Howard University. A dedicated educator, she was named the 2020 Scripps Howard Foundation/ AEJMC  Teacher of the Year. Her former students have won numerous awards including Hearst, Emmy and National Association of Black Journalists national recognition and serve in all areas of digital, media and news from local to network levels. She earned a Master of Arts degree from the Columbia University Graduate School of Journalism. She has more than 25 years of news industry experience, most recently as an Executive Producer with CNN, where she was honored with recognition from the National Academy of Television Arts & Sciences for her contribution as the 9 a.m. newscast producer who helped lead CNN’s coverage of the September 11 Terror Attacks. She also received Peabody Award recognition for her contribution to coverage of Hurricane Katrina, and earned national awards from the National Association of Black Journalists (NABJ). Throughout her career, she pioneered coverage of major events such as the Oklahoma City Bombing anniversary, Summer Olympic Games, Trayvon Martin verdict coverage, and presidential elections and inaugurations. She is also founder of MediaReady Consulting LLC, a media training, event management, and communications consulting service.

A published scholar, Jennifer was named a 2020 Fulbright Specialist Program honoree. Her research interests include the dissection of current practices and pedagogies in journalism, the transition from professional to professor, and the complex facets of women, media and images.  She has presented research internationally, and served as keynote speaker and guest for Nigeria’s World Press Freedom observances, throughout South Africa for Media Freedom Week, and has served as featured speaker for numerous U.S. State Department programs on misinformation and press freedom including Ukraine, Poland, Democratic Republic of Congo, Malta and Cyprus.

Her published study on the pageantry and politics of the women selected as “Miss Howard University” during the Civil Rights and Black Power Movements, is the subject of a forthcoming multimedia project inspired by her own experience being crowned “Miss Howard.” Her other creative works include producing live presidential election specials for PBS affiliate WHUT-TV, and supervising broadcast coverage of the 2016 Democratic National Convention. She also reported and produced an in-depth account of a day with the U.S. Border Patrol in El Paso, Texas, which captured migrants crossing the U.S. Mexico border. She is executive producer of the capstone student newscast, NewsVision, which broadcasts to 2.5 million viewers in the Washington DC metropolitan area.