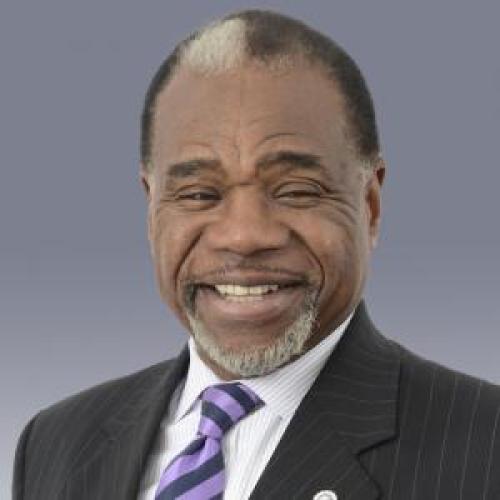 Dr. Harvey was appointed Associate Provost for Academic Innovation and Strategic Initiates, Office of the Provost, Howard University, effective July 1, 2020. His portfolio includes, New Academic Program Approval Review, Online Programs and Strategy, Strategic Partnerships and Innovation Projects and Programs. Dr. Harvey previously served as Endowed Professor of Accounting and Dean of the Howard University School of Business. Dr. Harvey served as head of the School of Business for 26 years. Under his distinguished leadership the Howard University School of Business continued to make strides in its ongoing quest to maintain excellence in its academic programs. In addition, to this prestigious position, Dr. Harvey is a tenured member of the faculty and has served as a full professor in the Department of Accounting for over 25 years. In fall 2007, Dr. Harvey became the first endowed professor in the School of Business when he was named Frank Ross/KPMG Endowed Professor in Accounting.  He has twice been named “Educator of the Year” by the National Association of Black Accountants Inc. (NABA).  During his academic career he has held numerous other administrative positions at the University, including Director of Graduate Programs, Departmental Chairperson, and Interim Dean.  Additionally, he held other faculty appointments at the University of Nebraska, University of Miami and Georgetown University.

During Dr. Harvey’s tenure as Dean the School of Business has garnered national and international ranks including;

- Rank in the Top 50 National and International Business Programs by Bloomberg BusinessWeek, #33 and #38 respectfully

As chairperson of the Department of Accounting, Dr. Harvey spearheaded the accreditation of the School’s accounting program.  This was a significant achievement giving the Howard University School of Business the distinction of being the first AACSB accredited accounting program in the Washington D.C. Metropolitan area.  Under his leadership the School of Business was able to obtain AACSB International accreditation reaffirmation of all its programs, including separate reaffirmation of the Accounting program, four (4) times!

Dr. Harvey is the recipient of many awards and citations. Dr. Harvey was selected as the 6th recipient of the “The Milton-Wilson Dean’s Award” by the National HBCU Dean’s Roundtable. Also, Dr. Harvey was named “Alumnus of the Year” by Pittsburg State University. Dr. Harvey was the recipient of the Washington Business Journal’s Minority Business Leader Award. In 2010, the Secretary of the Department of Commerce, Gary Locke, named Dr. Harvey as an inaugural member of the newly created National Advisory Council on Innovation and Entrepreneurship (NACIE). This group was established to support President Barack Obama’s Innovation Strategy. He has twice been named “Educator of the Year” by the National Association of Black Accountants (NABA) Inc.

Dr. Harvey has served on numerous boards and committees including the Board of Directors of AACSB-International.  He is a member of the Dean’s Advisory Board of the University of Nebraska – Lincoln, College of Business. He is President of the Management Education Alliance, Inc.

Dr. Harvey is also a Certified Public Accountant (CPA), holding certifications with the District of Columbia and the State of Maryland.