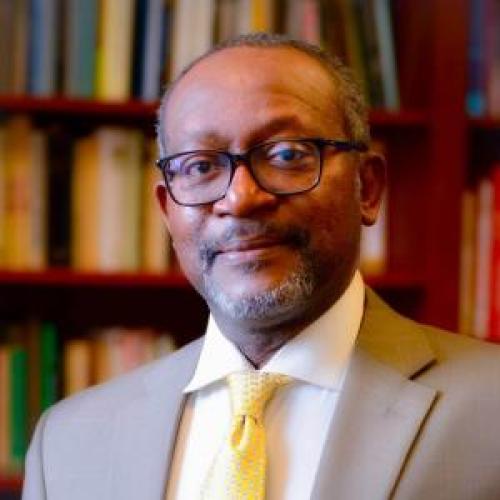 Associate Dean for Academic and Student Affairs and Humanities

James J. Davis is currently Associate Dean for the Humanities, Academic and Student Affairs  in the College of Arts and Sciences and professor of Spanish and Foreign Language Education in the Department of World Languages and Cultures at Howard University, Washington, DC.  He served as chair for 20 years. A native of Virginia, Dr. Davis earned the B.A. in Spanish and English Education at Virginia State University, the M.A. in Spanish Language and Literature at the Ohio State University, and the Ph.D. in Foreign Language Education at the University of Maryland, College Park.  He also holds a certificate in Hispanic Studies from the University of Madrid.  As a Fulbright scholar, he earned a certificate in Brazilian Studies and Portuguese from the Instituto Alumni in São Paolo, Brazil.  Davis’ primary research interests are African Americans and foreign language learning, the teaching of second languages, the history of Black education, and the manifestations of Blackness in the literature of the Dominican Republic and in other Spanish-speaking areas of Latin America.  His publications have appeared in Diversity Across the Curriculum, Revista Iberoamericana, Afro-Hispanic Review, College Language Association Journal,  Association of Departments of Foreign Languages Bulletin, Black Issues in Higher Education,  Journal of Negro Education,  Las Américas,  Atlanta Review, Northeast Conference Reports, Foreign Language Annals, Publication of the Afro-Latin/American Research Association,  Revista Rumbo,  Journal of Afro-Latin American Studies, The ACTFL Foreign Language Education Series, and Encarta Africana.   A former president of the College Language Association (1992-1994), Davis served as its executive treasurer from 1996-2007.  He has served on the editorial boards of the Afro-Hispanic Review, Publication of the Afro-Latin/American Research Association, and the Foreign Language Annals.  Dr. Davis is a 2004 graduate of the Harvard University Management Development Program and served as a Summer 2005 Visiting Scholar at the Educational Testing Service which led to his three-year membership on the Advanced Placement Spanish Test Development Committee.  He is a frequent consultant on foreign language curriculum projects for government agencies and local and national school districts.  Davis is frequently called upon to review pre-published and published manuscripts for national and international publishing venues, including the Howard University Press and Howard’s Journal of Negro Education. Professor Davis is the recipient of many grants and awards. Most recently, he was granted a $500,000 award from the Institute of International Education to establish a Center for African Languages at Howard University.  Other recent grants include a one-million dollar award from the Department of Defense (2006) to establish a Center for Foreign Language Study at Howard and an award in 2007 in the amount of $190,000 from the National Endowment for the Humanities to conduct on Howard’s Campus an Institute on the Literature and Culture of Equatorial Guinea, the only Spanish-speaking nation in Sub-Saharan Africa.